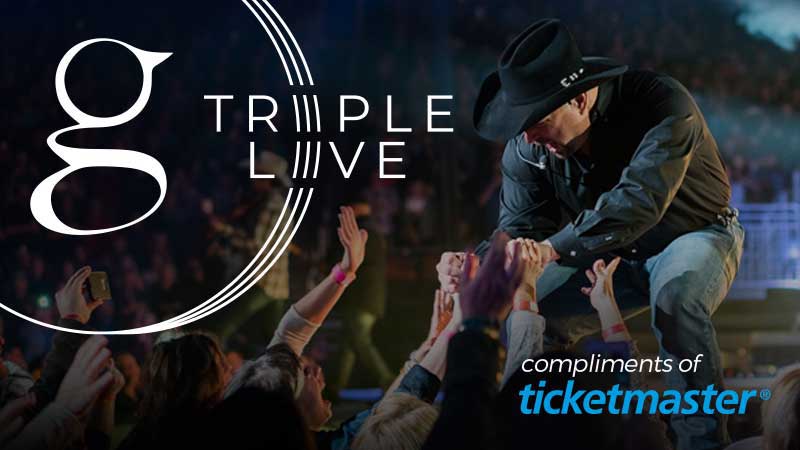 A SPECIALLY CREATED MIX FOR THE FANS

DURING "INSIDE STUDIO G"

LOS ANGELES, CA - August 27th, 2018- Garth Brooks just announced a new live album! The announcement was made at his Notre Dame press conference that was held today. The new live album is called, Triple Live. It's a specially created mix for the fans.

If that wasn't enough, Garth announced that a limited number of Triple Live albums will be available to download for FREE tonight with a special download code, exclusively through Ticketmaster. Please note, the album can only be downloaded onto a desktop or laptop computer.

Garth's first live record was his two disc album Double Live recorded during the 1996 - 1998 World Tour. It's the #1 selling live album in history, with 21 million albums sold, certified by the RIAA.

For three and a half years Garth Brooks World Tour with Trisha Yearwood, Garth has upped the stakes. Not only is Triple Live three discs, today's exclusive free download is no ordinary live album. Garth is calling it the FAN-MIX because the sound mix will allow you to CHOOSE, by adjusting your speaker or headphone settings, to sit in the middle of thousands of voices singing every word OR right up on stage, hearing the concert the way the band does. THIS is INTENSE and STUPID FUN. You’ll laugh, you’ll cry, it is JUST LIKE BEING AT A GARTH SHOW.

The download code for the album will be released on Garth's Facebook page tonight at 7:00 PM ET. Fans will have to tune in to "Inside Studio G," Garth's weekly Facebook live series. Garth will reveal the download code live during the show. Fans will be able to download the album from here www.ticketmaster.com/garthbrooks

Tickets for Notre Dame will be on sale Friday, September 14th at 10:00 AM ET.

It will be in-the-round staging. There will be an eight ticket limit per purchase.  Tickets can only be purchased at www.ticketmaster.com/garthbrooks or either Ticketmaster Express 1-866-448-7849 or 1-800-745-3000. Please note there will be no ticket sales at the venue box office or Ticketmaster outlets on September 14th. The concert will be rain or shine.