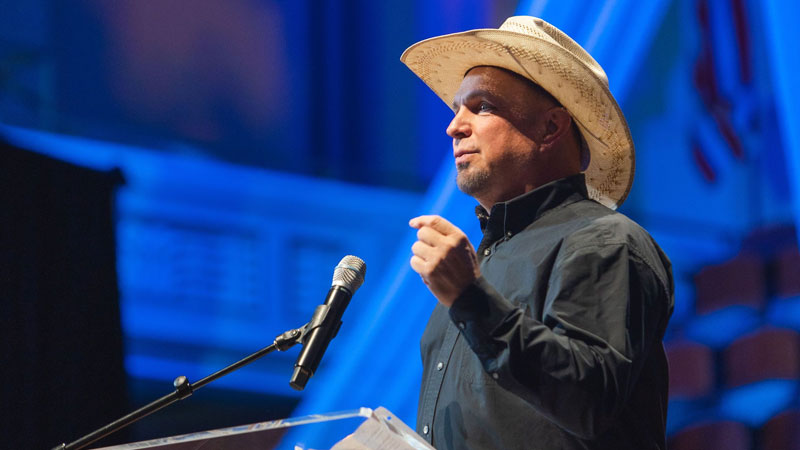 Garth Brooks had the honor of inducting Amy Kurland, founder of Nashville’s iconic Bluebird Café, into the Nashville Entrepreneur Center’s 2022 Entrepreneurs’ Hall of Fame during the 2022 NEXT Awards held at the Schermerhorn Symphony Center on October 24.
Introducing Kurland, Brooks stated, “The greatest fear you will ever face in your life is showing the world what’s in here,” pointing to his heart.  “The greatest gift you will ever receive is a fierce angel that stands beside you and protects you while you do that.”
Brooks famously secured a record deal with Capitol Records after performing a showcase at the Bluebird Café, known internationally as a premiere listening room where singer-songwriters perform in the round.  Capitol had previously passed on signing Brooks, but label executive Lynn Schultz, who was in the audience that night, sought Brooks out immediately after his set.
“It was lovely to experience that as the judge at his first audition and then to invite him back to play and have that reinforced by the fact that he got a standing ovation in the middle of a song,” Kurland recalled. “That doesn't happen very often.”
Kurland is part of a Hall of Fame class that also includes André Prince, owner of Nashville’s legendary Prince’s Hot Chicken; Mike Shmerling, who founded or co-founded 11 businesses as well as Abe’s Garden Community, a senior living nonprofit, in honor of his father; and Steve Turner, founder of MarketStreet Equities Company, who spearheaded the development of The Gulch.
Nashville Entrepreneur Center, also known as “the EC,” is an experienced, professional non-profit organization with a vision to help make Nashville the best place in America to start and grow a business.  Its mission is “to connect entrepreneurs with critical resources to create, launch and grow businesses.” This year’s NEXT Awards celebrated 51 finalists in five business categories, giving the award to one winner in three stages of business: startups, emerging and market mover businesses. Entrepreneur of 2022 and Emerging Entrepreneur of 2022 awards were also presented.